Tracking in the Warehouse Featured 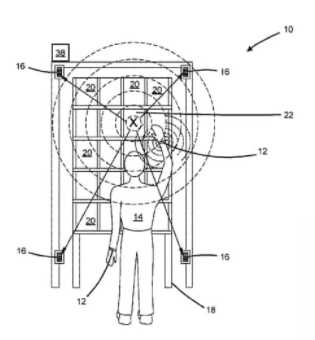 Managing orders in a fast moving environment can lead to some unusual (and sometimes strange) conditions. And when conditions are extremely time sensitive even the position of a worker’s hands can make the difference between delivering the order and missing. And that’s the issue Amazon seems to be tackling with its latest patent.

Ultrasonic wristbands may seem like overkill, and even overly intrusive if you’re an employee instructed to wear them, but they are likely not the last of the wearable technologies being added to the supply chain in the name of efficiency and speed. Amazon’s patent application calls for an “Ultrasonic bracelet and receiver for detecting position in 2D plane”  but the full explanation of their use is still open to conjecture.

Here’s the abstract from the USPTO filing:

The explanation boils down to tingling the worker’s wrist when they are near a particular item bin. That would make sense if the worker isn’t certain which bin they are supposed to pull product from and there’s a lot unsaid about distance from the bins and how or if the band could indicate which direction the bin is in and lead the worker to the right bin.

That’s a lot of tech and doesn’t even take into consideration the WHM system that manages the inventory and all the worker interactions.

The patent filing goes into more detail about the pulses and the specific tech. And if Amazon is able to increase its productivity in the warehouse without becoming overly invasive of its employees (something that’s already been alleged by some workers)  it may be able to continue to meet its aggressive delivery goals.

In all, this is part of the trend toward more technology in smaller components as the Internet of Things (IoT) continues to find applications in unlikely ways and in previously unthoughof places.

Read 3024 times
Rate this item
(0 votes)
Tweet
More in this category: « Bar Codes in food and drugs Technologies are defining the supply chain »