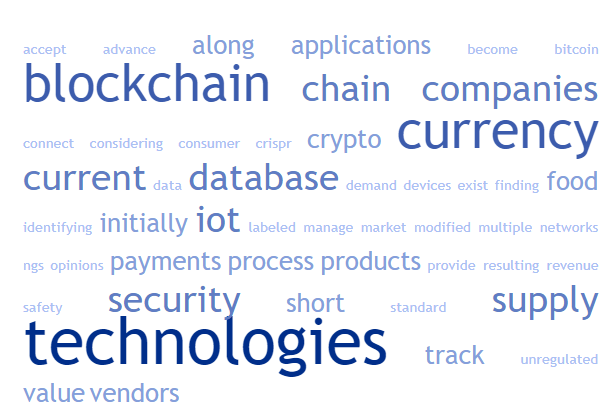 Technology can be a tremendous help in getting our products to market and there are plenty of technologies finding their way into both the supply chain and the products traveling along the paths to market. The initiatives and purposes these technologies address are all initially aimed at solving problems but like all well-intended technologies some are bound to be subverted and cause unintended consequences. Here are a few current technologies that should be watched with an eye toward caution.

Genetic modification has been with us as long as humans have grown food and experimented with changing crops by fertilizing one plant with another’s germ material. The advent of clustered regularly interspaced short palindromic repeats (CRISPR) has made next-generation sequencing (NGS)a simple process that is being used to enhance all kinds of genetic material to make the resulting next generation better, or at least different from its parents.

Resulting produce is becoming part of the supply chain especially on grocery shelves and consumers have varying opinions regarding how these products should be labeled and about the safety of their use. The food safety modernization act (FSMA) is being modified to stay current with trends and concerns but as a legislative process it will likely always be behind the current technologies as they evolve. There are currently many opinions but few real answers to identifying intentionally modified foods but rules are being drafted to advance tracking and labeling compliance.

The Internet of Things is growing rapidly as costs to add intelligence to multiple stages along the supply chain are driven down. Advances in identifying cargo, its conditions along their routes, and managing inventory are making it easier to track and manage items at every step.

However, IoT at its heart provides connectivity between its multiple installations and enterprise networks and there exists no standardized and ratified security standard to protect IoT devices from hacking. The population of IoT devices is projected to eclipse 20 billion by the year 2020 and without adequate security each of them is a target for intrusion that can expose networks and the computers they connect to malware, data theft, ransomware, and more.

Unregulated currencies are finding their way into payment processes. Monetary alternatives like BitCoin are accepted as valid payments by many vendors because of consumer demand. However while the unregulated status allows for international flow of funds its value can and does fluctuate over time. The value of a single bitcoin at the time of this writing is more than $10,000 US but over the previous three months its value has ranged from a low of $7,500 to a high of more than $19,000.

Basing revenue on a volatile currency may meet customer demand but companies that accept crypto currency should concentrate on converting their payments to a stable currency immediately and separate their speculation from their revenue.

Blockchain data structures are closely related to crypto currencies because they underpin many of them as secure distributed databases that have proven to be reliable even in their relatively short history. But blockchain is a database technology in much the same way that SQL is a database technology. It is not an application in itself. Many large companies including IBM and Oracle are pursuing blockchain implementation strategies but for companies that use the applications from these vendors the database employed is a secondary issue that can provide added levels of security if done properly.

Blockchain should not become a criteria for choosing a vendor nor should companies view blockchain as an initiative in itself without considering the broader implications of the applications they may be considering applying it to.

The jury is out on most of these technologies but it’s important for every participant in the supply chain ecosystem to understand that they exist and how they may affect operations in the short and long term. Track them so you don’t get blindsided when they begin to make an impact on your business.

Read 2832 times
Rate this item
(0 votes)
Tweet
More in this category: « Tracking in the Warehouse Blockchain Obstacles and Opportunities »