Downtime Counts - And Adds Up

Last week’s survey asked about downtime. Specifically we wanted to better understand if locally installed EDI applications were more stable than managed services, VAN connections, or SaaS providers. Common wisdom has it that cloud or SaaS based services are less reliable than alternatives because they are outside the direct control of the users. In fact, the opposite is true.
A majority of you, (52%) indicated that their internally based systems experienced outages lasting from 2 hours to longer than a full day, while 44% indicated that SaaS based systems experienced “Brief / inconsequential” outages with no disruptions lasting longer than 8 hours. That was followed closely by those using Managed services, responding that 42% experienced brief outages, but 31% had longer outages lasting from 4 hours to more than a full day. 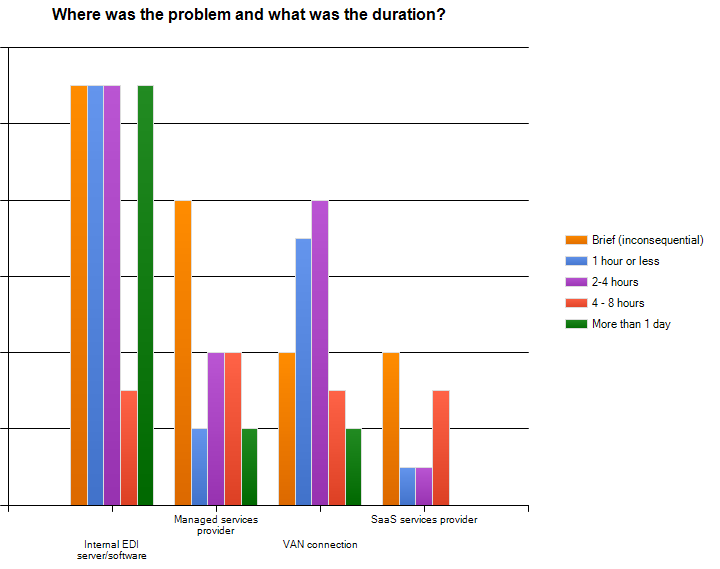 Another surprising finding was that the long standing VAN services that have supported the EDI infrastructure since its beginnings were reported by 53% as having outages lasting from 2 hours to more than a full day.

The consequences of these findings are manifold, and have continuing impact on both the companies that are using the services and those supplying them. For the trading partners relying on constant uptime to support their trading activities, short outages, particularly with regard to EDI systems, are likely to have only slight financial impact as long as the outages don’t result in loss of data. However when trading is interrupted for longer periods and result in delays to orders being sent and received, the consequences can be significant.

Most suppliers are judged by their customers according to a scorecard valuation that includes timely delivery of not only products, but of responses to orders and notifications of shipments. When those electronic documents are not delivered within the prescribed time frames, scores can be lowered, and can even result in chargebacks or cancellation of agreements, in extreme cases. The outages that last more than a full day are particularly troubling for high volume trading relationships, and are the ones most likely to cause serious problems.

For the final question in the survey asked “How did your company deal with the situation?” a full 73% of those companies using internally hosted applications indicated they were “Confident in the resolution process,” which seems counter intuitive since that group experienced the most frequent and longest lasting outages. As a final and most dramatic resolution, the respondents were asked about plans to replace the offending systems. According to the results, the Managed Services providers are the organizations most at risk, with 14% indicating they were in the process of replacing their systems.

71% of respondents using SaaS based services said they were confident in the resolutions put into place. It is interesting that this group is nearly as confident in the solution as those using internally based systems because they have less direct control over the systems they are using. And 0% of those using SaaS based systems are in the process of finding a replacement for their EDI system. 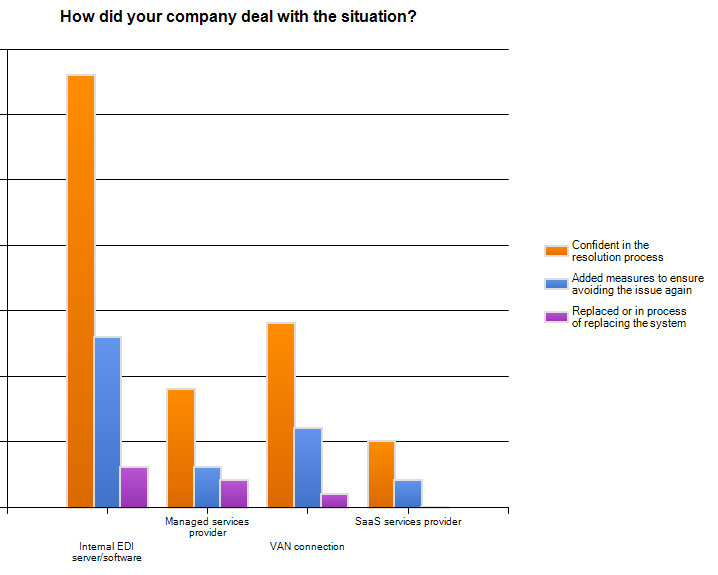 While the common perception may be that having closer control over systems by installing them inside the corporate firewall results in better overall response and reliability, the survey respondents show this is not the case. In fact, those companies that rely on SaaS/Cloud based EDI services have fewer and less interruptive outages.

Read 3653 times
Rate this item
(0 votes)
Tweet
More in this category: « Tags Limit Visibility The Cloud IS the Way... Really? »